So you might remember that I blogged about dyeing with the skins of white onions back in February; they have the gold/yellow papery skins. I had added a copper mordant to the dye pot at the end in an attempt to create a deeper, richer colour. The photo below shows the result from then.
The yellow colour was from dyeing the wool for one hour in an onion dye stuff; the deeper brown colour was created after adding the copper mordant.

After posting it, a reader commented that if I had used red onion skins, I would have gotten the same results. Nothing like a bit of experimentation……..

I tried to keep the red onion dye prep as close to the original. I used the same method I had used for the plain onion skins. I use one third the weight of the wool in skins; 33g of skins per 100g of wool. I also used the same wool type and water source.
I boiled the skins in rain water to get the dye stuff. 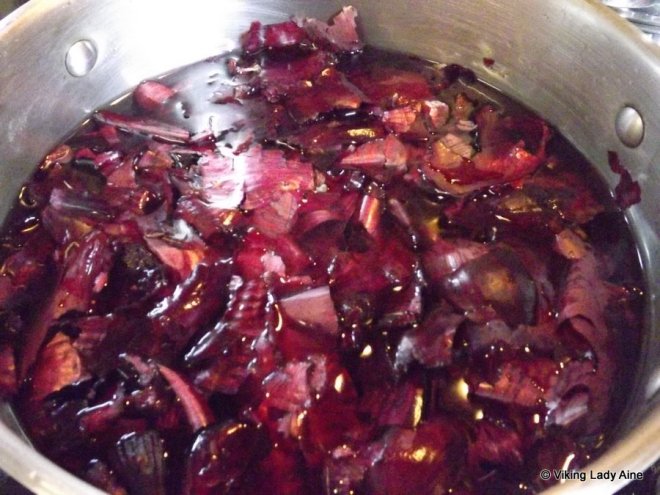 After simmering for an hour, I drained the water off the skins and used this as my dye.
When I added the wool I got

I have to say that it looked quite promising. After simmering for an hour I got the following results.

They are really lovely colours. The question was did the red onions give the same colour as the plain onions with a copper mordant?

To me the answer has to be no; at least not in this case. The copper mordant seemed to have dyed the wool a deeper shade of brown, whereas the red onion skins gave a deeper gold yellow. But to be honest, both dyeing attempts gave beautiful colours…. Now to start saving skins all over again…….