So it’s spring, and like all good 21st century vikings I recently did a quick spring clean; well actually I had to defrost my freezer as it had become very badly iced over!
Anyway, while cleaning out the drawers I came across a box of frozen blackberries. I had bought them with the intention of making a Blackberry Crumble but must have forgotten them. They had passed their sell-by date by quite a long time, and so with the principle of waste not want not, I decided to use them to dye some wool. At the same time I could justify using another fruit as a dye stuff.

I had previously mordanted some wool with Alum.

As in the previous dye experiments, I was so hopeful when I added the wool to the dye-bath; it looked like I was going to get a beautiful rose pink.

But as in the previous experiments, what you initially appear to get is not always what you end up with . This time we got a blue/gray (the photos don’t show the colour exactly)! 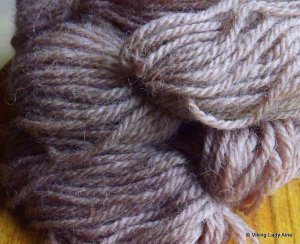 So there we are; another dye experiment completed.
Quite a nice colour, quite similar to the one I got from elderberries, but to be honest I might use the blackberries for the crumble next time………………